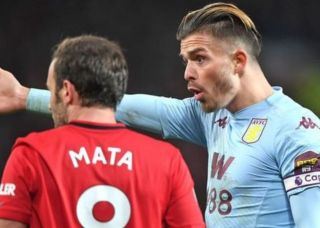 It’s no secret that Manchester United need an extra creative spark in midfield and Grealish would be an upgrade on Jesse Lingard. At least the 24-year-old is scoring goals and providing assists, which would benefit attacking players like Marcus Rashford, Anthony Martial and Daniel James.

Another player who United could do with upgrading from is Juan Mata. The Spaniard, 31, doesn’t quite have the legs to play each week and I couldn’t tell you when he last performed well for the Reds.

Grealish has been in sparkling form for Villa, his boyhood club, netting three times in his last five Premier League games.

READ MORE: How Man Utd could line-up against Tottenham: Solskjaer to opt for a back-three, Lingard over James

United manager Ole Gunnar Solskjaer reportedly told Grealish after the game he was the best player on the pitch, according to The Metro, and Smith doesn’t seem to have a problem with that:

“I’d say it if I saw opposition player running the game,” Smith said (via Birmingham Live). “And for 30 minutes he was.”

Sky Sports ran a report this week claiming Grealish fits United’s transfer profile. He could not have had a better audition at Old Trafford.

However, Smith explains why he is not concerned about Grealish moving elsewhere:

“I’ve seen speculation in the press with pundits linking him with other clubs, what they don’t realise, I’ve worked with this kid for 14 months, he tells the story himself of jumping into a bush in the garden at six years old pretending it was the Holte End,” he said.

“He’s Villa through and through, he’s now performing on the biggest stage he can in the Premier League for Aston Villa. He’s playing well, scoring goals, creating assists and it’s a club he loves.

“He signed a new deal at the start of last season, we’ve got two very wealthy owners who want to build the team around Jack.

“They can keep linking him, but this is the one club he loves and that’s probably the most important thing.

“Wolves got promoted last year, I didn’t see Neves getting linked with Manchester United… this isn’t a small club here at Aston villa.

“As I’ve said, we’ve got two billionaire owners who bought the club for a reason, wanted this club to get into Premier League.

“We are in the Premier league and now we want to carry it forward. I’m sure they wouldn’t be thinking of one of our top players being linked with other clubs.”

The playmaker’s stock is bound to rise if he continues performing at this level and United will undoubtedly continue to be linked with him until they sign someone of the same ilk.