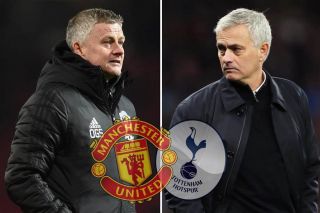 Manchester United return to action in a quick turnaround and there’s no prizes for guessing who the spotlight will be on in a tale of three managers at Old Trafford. In the middle of Ole Gunnar Solskjaer’s biggest week as United boss, there’s a familiar face back in town and he won’t come quietly.

Football often throws up a tale of the unexpected and José Mourinho’s return to management certainly fell into that category when the Portuguese was appointed at White Hart Lane a fortnight ago. It was clear that Spurs and their hierarchy had been flirting with the Special One for some time, and his arrival has certainly had the desired effect with a rejuvenated Tottenham team winning three out of three under him so far.

A year ago almost to the day since his acrimonious departure from United, Mourinho takes the north London side to face his immediate successor at Old Trafford with Solskjaer feeling the pressure. To add to the irony, the man who was sacked in turn to pave the way for Jose in north London – Mauricio Pochettino – has long been touted as a future United manager in waiting. It’s a funny old game isn’t it. A love triangle of unpredictable proportions.

So far under their new manager, Spurs have beaten West Ham and Bournemouth in the league with a Champions League victory over Olympiakos thrown in, perhaps in a manner you wouldn’t usually associate with a typical Mourinho side. They’ve been free-flowing and scoring for fun but leaking goals at the other end too. Will he revert to his old ways as he meets a fellow “big six” rival for the first time by constraining things or will he try to outgun a shaky United side there for the taking?

This is, in many ways, the ideal game for United and Ole. We often raise our game when it matters and pull out results when backs are firmly jammed against the proverbial wall. Spurs perhaps head into the tie as marginal favourites

Mourinho’s return could not come at a worse time for Solskjaer, with United’s failing to get the better of two newly promoted side having only drawn with Sheffield (3-3) and Villa (2-2) with Pochettino one of many waiting in the wings. While United are keen to back Solskjaer’s long-term vision for the club, a humbling home defeat to Mourinho of all people could force Ed Woodward to pull the trigger once again in December.

Ole is hoping to have both Scott McTominay and Paul Pogba at his disposal once again with the former the most likely of the two to feature here. Nemanja Matic, Eric Bailly and Timothy Fosu-Mensah are back in training but Diogo Dalot and Marcos Rojo remain sidelined. The United boss could be tempted to revert to a back three with Axel Tuanzebe coming in to try to tighten a defence that has looked leaky in recent weeks.

For the visitors, keeper and captain Hugo Lloris is out until the New Year so Paulo Gazzaniga will continue between the posts. Erik Lamela (thigh) and Ben Davies (ankle) are both ruled out. Despite his winning start as Spurs boss, Mourinho has expressed concern over a defence which has conceded six goals across those games.

Pochettino’s Spurs beat Mourinho’s United 3-0 in the corresponding fixture last season, but we gained revenge in the return game when a Marcus Rashford goal set the seal on a 1-0 away win for Ole over Poch’s men. That win was the only the second time in 32 meetings that Spurs have taken the spoils against the Reds at Old Trafford.

United and Ole often raise their game on the big occasion, so I can see us getting something from this. We’re at our best when there’s no pressure or expectation. We’re going for the draw.