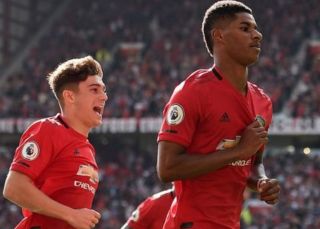 The Wales international says that Rashford is “getting better” with each game he plays.

Rashford has been in good form for Manchester United as well as England ever since the focus was turned to playing him out wide as opposed to up front as a centre forward.

The 22-year-old currently has 7 goals and 4 assists to his name in the Premier League this season.

Meanwhile, James has been settling into life at Old Trafford following his summer transfer from Championship side Swansea City.

James has enjoyed linking up with Rashford — assisting the England forward three times already this term.

“Yeah, Marcus is obviously a great player to play with,” James told the official Manchester United website before Sunday’s game. “The abilities he has are fantastic and he’s getting better every game.

“Something we work on in training is the movement and things like that and obviously, for me, getting out side and [in] those positions I want to find him as much as I can, to get him goals and for him to assist me as well.

“That’s something we talk about every day, to improve each other’s game.”

United scored twice against Aston Villa on Sunday but were unable to hang on for three points. The game finish 2-2 with Tom Heaton’s own goal resulting from a Rashford header.

Next up for the Red Devils is a crunch clash against Tottenham on Wednesday night, as we prepare to welcome José Mourinho back to Old Trafford after getting the sack one year ago.

It’s another must win game…