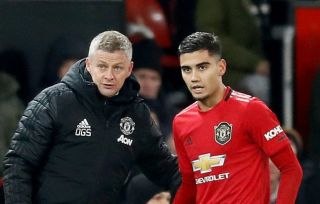 As you might expect, Monday mornings become even gloomier after more dropped Manchester United points. Ole Gunnar Solskjaer’s points ‘haul’ since becoming permanent manager is inferior to ALL of the post Sir Alex Ferguson managers, yes even David Moyes. Hell, even the recently chopped Unai Emery, due to ‘results and performances not being at the level required’ picked up more points than our increasingly greyer and delusional Norwegian.

Even that is not the most infuriating bugbear this morning…

It is the little appetite for ‘another’ change and the sheer refusal from the United suits to accept that aforementioned statement delivered by the Arsenal board refers to United in at least equal, if not bigger, measure.

Solskjaer is adamant that there will not only be an upturn in form, but even United could go on a Ferguson-esque classic winter’s run of churning out wins. Forgive me, but how on earth has he come to that conclusion when his record since becoming permanent manager has barely seen consecutive wins and has the recurring one step forward, two back feel?

The fear factor has long been extinguished at Old Trafford, but teams like Aston Villa, who this time last season were hurling cabbages at their manager, are turning up and not feeling daunted at the once fearsome prospect. Maulings in the lion’s den have been replaced by relaxing 90 minute stints at a petting café, as Villa barely felt perturbed in avoiding defeat at Old Trafford for the first time since 2009.

How much more sobering a season does this have to be before the suits wake up and smell the coffee that the fans paying hard-earned money are not getting sufficient value for said expenditure? Well, the nauseating facts are this: 22 points behind, well you know who and United are closer to the relegation zone than the top four, which is quickly disappearing out of sight.

It’s all well and good using the flowery worded long-term vision and rebuild, but that should not make the current a write-off or excuse for abject performances. Who, in their right mind, would even want to come to this United side in January or summer, when they are limping through quick sand? There has to be evidence of progression, but sadly there is more evidence to the contrary.

Solskjaer’s vision and recruitment have been positives admittedly, but that shouldn’t grant him immunity from criticism for some very questionable in-game decisions: Leaving it past 70 minutes to make a change against Villa, starting Juan Mata and Andreas Pereira and leaving it until the death to bring on forward Mason Greenwood.

It makes me wonder, just what input United to the core duo Mike Phelan and Michael Carrick are having? There can be no doubt about it, they know the principles United need to show to their fans and to be successful, but we are seldom seeing those values. Solskjaer is still a relative novice in the dugout and he could do with the ‘cone man’ stepping up and help wrestle United out of this predicament.

One of the supposed plus points this season was United looking more solid at the back, does that factor in 8 goals shipped against all the promoted teams from last season? If anything, United’s defence is getting worse by the game, Harry Kane and Dele Alli could hardly have a better incentive to wake up in the morning than face our flailing defence. They all need to do more, much more, especially the £80m Harry Maguire, who was meant to remedy much of United’s defensive ills.

And it could get even worse yet. United’s next two fixtures are Tottenham, whose resurgence under José Mourinho was to be expected and he will have the wounded animal approach which spells danger, followed by a trip to the defensively vulnerable but attacking-minded Manchester City. United could well be hovering over the drop zone if the likely two losses do happen.

But you know what? Even then there will be a mad defiance that things are rosy in United’s garden and Solskjaer will not lose his job.

While Liverpool are standing on the beach looking out to the inevitable silverware on the horizon, it cannot get more sickening, United are burying their head in the sand looking for divine intervention, rather than being an expectation, that things will pick up. Wake up! If this season’s theme continues, we will be mid-table at best. I hear some fans say ‘this is where we are now’, that doesn’t mean it should be acceptable, we are Manchester United. For all the revenue and infrastructure at the club, this is not good enough, period!

Einstein’s old adage, which is still evidently true to this day, is that ‘the definition of insanity is doing the same thing over and over and expecting different results’. It is therefore insane that Andreas Pereira continues to fall into a place in a Manchester United midfield, when it is clear he is nowhere near the standard required. Both he and Fred are making a mockery out of the legendary Paul Daniels and others in deceiving the public into making them believe they are Brazilian midfielders and have even worn the famous yellow. The amount of times they concede possession is negligent and criminal and you wonder why United have barely controlled a football match since Solskjaer took over permanently.

I even read recently that United are said to be, ‘reasonably satisfied’ with their midfield options. Well, God help us!

How can it be that Manchester United, who are continually branded as ‘the world’s most famous football club’ are so reliant on Scott McTominay, who hasn’t even chalked up 50 domestic appearances for the club and who was once labelled as ‘Mourinho’s player’?

Before Solskjaer was appointed permanently, there was talk of an uncertain future for McTominay, who was linked with a loan move to Leeds United. Now, he is the driving force and heartbeat of a team looking to get back to the top. The fact United are looking at midfield options now, should come as no surprise, but only serves to highlight further that the recruitment drive over this summer was not aggressive enough. Marouane Fellaini was sold and Ander Herrera turned down United’s efforts to keep him and they were replaced by? You guessed it, not a single body.

How can it be that the declining and ageing Juan Mata got a new three-year deal when his best days are clearly behind him? Pereira, Jones and Smalling all got four-year deals? The latter is turning heads in the Italian capital and there was no substance whatsoever to the former two getting those extensions.

It emphasises the sickening truths that United are a mess on and off the field. Crumbling and being unable to withstand the slightest bit of pressure from opponents, dropping points in winnable games, conceding goals left, right and centre, with owners not looking to better the situation and make a positive change, the obvious change… Mauricio Pochettino.

Let me ask you this, were it not for that wafting right boot steering the ball into the top corner in Barcelona in ‘99, would you accepting of the situation? Moyes, Van Gaal and Mourinho were sacked for less. You could say they all lost the dressing room so, by that logic, shouldn’t this be even more alarming — that the players do not have any animosity towards Ole Gunnar Solskjaer and this is actually the best they can conjure up? Invariably a player revolt brings the manager a hot off the press P45 form but there has been little evidence of the players turning on Solskjaer.

The most minor smattering of boos could be heard from Old Trafford on Sunday: In the stadium, United are a class apart, not even Moyes was subjected to vocal disapproval. Although evidently a minority, it is proof that patience is wearing incredibly thin.

Dare I say that the reluctance to change is solely weighted on Ed Woodward’s shoulders as a saving face exercise to avoid having another managerial sacking on his record? Then again, this is a man with next to no footballing expertise.

In just 6 days time, United’s outlook could be looking significantly worse, but would that even be enough to send shuddering alarm bells through the spines of the powers that be?

How much more crap do we have to sit through before accepting that things have to change?

Now there is overwhelming evidence that Solskjaer is close to running his race, with Mauricio Pochettino in his rear view mirror.

Whether the Glazers and Woodward see it as we do though is another matter.