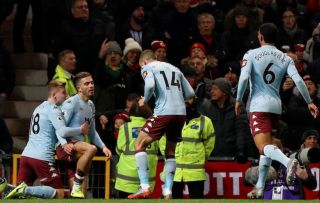 Jack Grealish was excellent for Aston Villa against Man Utd at Old Trafford on Sunday.

The playmaker scored a brilliant goal in the 11th minute and put Manchester United’s defence under a lot of pressure throughout the game.

Garth Crooks has suggested that United need a player like Grealish and has tipped the club to launch a transfer pursuit with the aim of signing the Villa star, as per BBC Sport.

Crooks wrote the following: “After the attention paid to Jack Grealish by Manchester United, I think he is entitled to danger money! I can’t remember when a team have inflicted so many tackles on a single player. I suppose Grealish should take that as a compliment.

“The Aston Villa captain scored a wonderful goal, had a fabulous game at Old Trafford and is precisely the sort of player United need to bolster their prospects. United fans are having to watch too many ordinary players while they are being asked to pay Champions League prices.”

The last part of Crooks’ assessment hits the nail on the head. It makes you think about the money spent on Fred and why United have two Brazilian midfielders who can’t dribble or pass a ball to a teammate standing a mere 5-yards away.

According to WhoScored, Grealish took three shots, played one key pass, had a pass accuracy of 88.6%, took 59 touches, and made one tackle. He was without question one of Villa’s most influential players at Old Trafford.

Although Villa are a newly promoted side, Grealish has become one of the best attacking players in the Premier League.

If Dean Smith’s side are to have a successful season, then Grealish will need to stay fit and on top of his game, like we saw in front of our very own eyes on Sunday.

Grealish has scored 3 goals and registered 4 assists in the Premier League this season — from just 12 appearances.

United definitely need to be in the market for a creative spark and it looks like a toss between Grealish and James Maddison.