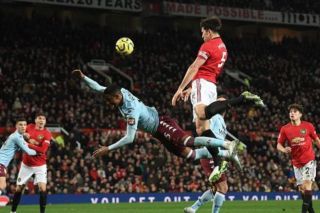 When is enough, enough? That tipping point is surely creeping ever closer, after United failed to beat a newly-promoted side for the second week running. Yet another uninspiring performance stemming from an underwhelming team selection, and compounded by unimaginative in-game substitutions. It is hard not to feel some level of sympathy for Ole Gunnar Solskjaer’s plight, but the current mediocrity was entirely predictable in the summer.

Only making one change from the starting eleven away at Sheffield United may have been forced upon the manager, with the continued absences of Paul Pogba and Scott McTominay, but his persistent blind spot when it comes to Andreas Pereira continues to baffle. Simply put, Pereira is not good enough.Never has been, and never will be. Youngsters like James Garner and Dylan Levitt, who were given minutes away at Astana, may not be ready for regular starting roles – but why not give one of them a chance? Ole rewarded Brandon Williams with a starting left-back role following a number of promising outings. However, he’s also rewarded Pereira for continued inadequacy. You wonder just what kind of message that sends out to other under-performers. Something has to give.

United were, once again, lacklustre in the first 45 minutes – and fortunate to go in level at the break. Pereira did provide the cross for Marcus Rashford’s equaliser (albeit via Tom Heaton’s back) – but that sole contribution shouldn’t have spared him a similar fate to Phil Jones last week at Bramall Lane, in being withdrawn at the interval. His Brazilian compatriot Fred wasn’t much better, but at least did improve slightly in the second half. Juan Mata’s effectiveness in the number 10 role relies heavily on being able to receive the ball in good areas, but with a midfield so porous – United were never in control of the game. Epitomised by Villa equalising just two minutes after Victor Lindelof’s looping header had put United into the lead.

The performances of Harry Maguire continue to be a worry, although he is not probably not helped by an uncertain Lindelof alongside him. Even Aaron Wan-Bissaka had uncharacteristically shaky spells in this game, perhaps a symptom of a lack of confidence besetting the team. Daniel James was probably the standout United performer, although the bar for that accolade wasn’t particularly high. Anthony Martial failed to trouble or occupy the Villa defence on many occasions, whilst Rashford – for all his endeavour – was often erratic. Ole may have been handicapped in the summer transfer window in undertaking the overhaul needed, but he is clearly not getting the most from those at his disposal. A bare minimum for any manager at the top level.

Then there’s the issue of in-game management. Whilst Solskjaer’s team selection was questionable, one hoped his substitutions may have had a similar impact to those against Sheffield United last weekend. Instead, they were rather reminiscent of Louis van Gaal. Essentially, three straight swaps – with Shaw, Lingard and Greenwood replacing Williams, Mata and Martial respectively. For any misgivings about Martial’s performance, he did nearly score with an attempted chip from close range prior to his withdrawal. Yet, despite United chasing a late winner at home – Pereira remained on the pitch. It was noticeable that with each misplaced pass or tackle lost, the Old Trafford crowd’s ire towards the Brazilian continued to grow.

United have now taken just 4 points from 24 available in games against Wolves, Crystal Palace, Southampton, West Ham, Newcastle, Bournemouth, Sheffield United and Aston Villa. For all the Board’s commitment to Ole and his ‘vision’, that tally is unacceptable. Add to that, the fact that United have also dropped 12 points from winning positions this season – and the stats make grim reading. Solskjaer’s legacy as a player, and place in United folklore, is assured – nothing can, or will, change that. The same was true for Kenny Dalglish at Liverpool. However, on-field accolades counted for little when Dalglish’s most recent managerial reign at Anfield was ended in May 2012, after just over a year in charge. The parallels are clear. Whilst Ole insists that the current league position and gap to Chelsea in 4th is ‘not a concern’ – he may think differently come 7.30pm on Saturday evening. By that time, Jose Mourinho will have returned to Old Trafford with his resurgent Spurs team – and the Manchester Derby will just have concluded at the Etihad Stadium. Can anyone say, with any great confidence, that even if Pogba and/or McTominay return – there will be any significant upturn in performance or results? The answer is probably not.