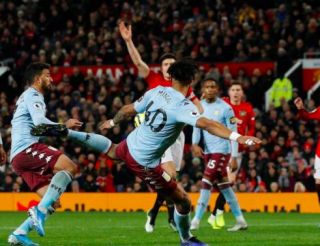 The Reds failed to beat a newly promoted side for the second consecutive game, drawing 2-2 against Dean Smith’s Aston Villa at Old Trafford.

United’s first-team had a week to prepare for today’s game after not travelling to Kazakhstan for the midweek Europa League defeat to Astana.

Questions have to be asked as to what the players who stayed behind in Manchester actually worked on, as we saw little improvement from performances in recent weeks.

Villa were more than a match for Solskjaer’s United and could have had all three points themselves if they were more clinical in front of goal.

Solskjaer’s men now have just 18 points in 14 league games, an unacceptable tally, even for a squad lacking in so many areas.

This game against Dean Smith’s side was painted as a potential confidence booster for a tricky week ahead, with Tottenham and Man City next to come in the coming days.

Instead, we saw another underwhelming performance that drew parallels with the game against Sheffield United last weekend.

Four wins from 14 league games this season is an affront to the name of Manchester United.

Four wins out of 14 in the Premier League for Solskjaer, and a week where he couldn’t muster a win against Sheffield United, Astana and Aston Villa. What next for the club legend? #MUFC

18 points from 14 games is a pitiful return + only the Premier League’s dearth of quality is keeping United’s place from looking even more embarrassing. #mufc

There is an argument that Solskjaer hasn’t got a lot to select from, but it doesn’t quite water anymore. Difficult to defend a manager who keeps selecting underperforming players.