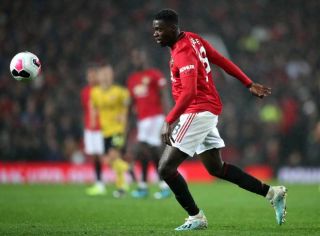 Axel Tuanzebe is in contention to feature against his former loan club Aston Villa on Sunday and we could see Brandon Williams start at left-back.

Man Utd manager Ole Gunnar Solskjaer even hinted that the centre-back could even deliver the team talk!

The 22-year-old enjoyed two spells at Villa Park and was a pivotal part in Dean Smith’s squad that won promotion to the Premier League.

Solskjaer has joked that he may make use of Tuanzebe’s knowledge ahead of Sunday’s kick-off — as he will have a good idea of Villa’s strengths and potential weaknesses.

“Axel can do the team talk for us,” Solskjaer told reporters in Kazakhstan, as quoted by the official Manchester United website. “Axel has done fantastic and he’s played for 90 minutes, after five minutes or 10 minutes against Sheffield United as well.

“He’s fit now and available and, as you said, he did well today.

“He gives me another headache but it’s a good headache. We’ve got players coming back. We’ve suffered from injuries badly and now we’re getting more and more back that will only help us.”

It certainly looks like the English defender is a better suited partner for Harry Maguire than Victor Lindelof. The Swede doesn’t have the pace to support our new signing and he isn’t commanding enough in the air.

At left-back he must pick from last season’s Sir Matt Busby Player of the Year, Luke Shaw, or youth product Brandon Williams. The two left-backs are surely ahead of Ashley Young in the pecking order and it’s the youngster who has impressed most this season.

Shaw only returned to action during Thursday night’s 2-1 defeat against FC Astana.

“I think the performances of Brandon has been a big, big plus,” the manager added. “And not just for him and me, but it’s also for Ethan Laird and you could see that against Astana. He’s played with Brandon through the years and for me it’s also a big boost for Ethan.

“We’ve got many full-backs, we’ve got loads of them who compete, and I’ve been very pleased with Brandon. He scored a great goal [vs Sheffield United]. Let’s see where we’re at but it’s great to have Luke play through 90 minutes today. Let’s see what we do for Sunday.”

That sounds like another hint that Williams could get the nod over Shaw, which, due to performances this season, we hope is the case.

Williams is one of a number of young players coming through who could have a future at Old Trafford.

The left-back likes to get up and down the line, and he’s not shy when it comes to getting stuck in!