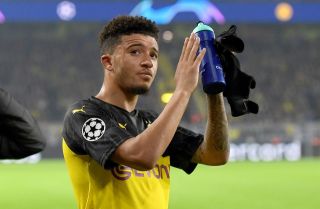 The England international was a used substitute on Wednesday night as BVB lost 3-1 against Barcelona, but it was his goal that came as a classy consolation at the Camp Nou.

Given he has been removed from the starting eleven at BVB, while not seeing eye-to-eye with those senior to him, Sancho’s future has been up in the air more than ever since his Man City exit in 2017.

READ MORE: Thrilled Astana defender will be telling grandchildren about his goal against Man Utd

Reports emerged after the game that the 19-year-old had been punished after arriving late for both the pre-match team briefing and training. That is also part of the reason Lucien Favre decided to drop him.

Sportschau indicating Jadon Sancho not only was late to the team meeting, but also the team breakfast and training too. #BVB

(Thanks to @Ravenblade86 for the heads-up)

Sancho has previously been suspended by the Bundesliga club for arriving late back from international duty in October, so it’s clear that he needs to improve his time keeping skills ahead of his next big move in the football world.

The loss to Barcelona led to reports suggesting Sancho wants to leave BVB in the new year and the German outfit are prepared to listen to offers, as per Miguel Delaney of The Independent.

However, Zorc is having none of it. He says recent issues have been dealt with in-house and maybe Gareth Southgate should take note for when two England players decide to trade blows in training next.

Michael Zorc plays down Jadon Sancho Borussia Dortmund exit: “I think Jadon did a good job when he came in. I don’t get the impression that a winter transfer is being planned.” #BVB

Sancho may not leave in January as it’s been long expected that a transfer will happen next summer instead. Barcelona, Liverpool, Manchester United and Real Madrid are all keen to sign him, per David Ornstein of The Athletic.

That’s a range of the top clubs in Europe and Sancho isn’t going to tolerate any hardship at Dortmund when bigger clubs are chasing his signature.