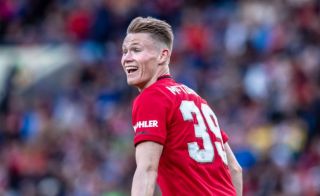 Scott McTominay could return from injury for Man Utd ahead of Sunday’s Premier League fixture against Aston Villa.

Ole Gunnar Solskjaer told the official Manchester United website that there’s a chance McTominay will play against Villa, although he sounded more definite about the Scotland international’s chances of facing Tottenham.

As a result, he’s likely to test McTominay closer to the game to make sure of his decision, but we could really do with the Scot in midfield after last week’s embarrassing display against Sheffield United when Andreas Pereira and Fred were abysmal in the centre of the pitch.

The game comes too soon for Thursday’s midfield duo – James Garner and Dylan Levitt – but both youngsters did themselves justice on their full debuts against FC Astana.

Many fans were against the idea of Jesse Lingard’s captaining the very young aside on Thursday, but to his credit he played very well in the Europa League and could come in to offer something different in the final third after scoring his first goal in 10 months.