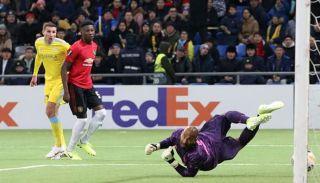 A youthful Manchester United side lost 2-1 away to Astana in the Europa League.

The 29-year-old defender scored Astana’s equaliser in the second half before Di’Shon Bernard’s unfortunate own goal gifted them a famous win in Kazakhstan.

Astana were knocked out of the Europa League before yesterday’s encounter and Shomko was still living up the result at full-time.

“I think we made our supporters happy with our last game this year at our stadium,” he said, speaking to UEFA. “The emotions are great as we have won the game. Not every year do we have a chance to play against such a top team. It’s good that we won today. We hope to God we continue in this vein.”

Shomko went on to explain his 23rd goal for Astana was memorable but that the win was more important.

When asked what he would tell his grandchildren about the game, Shomko responded: “I’ll say, ‘There was a time… [when] I scored against Manchester United.’

“It’s OK, the main thing is that we won and it doesn’t matter who scored. It’s just the emotions, it’s great that we won. We did everything as we wanted to.”

The result doesn’t really matter for United but we must still beat AZ Alkmaar in the final group game to top the group.

Solskjaer may field another young side with fringe players, though we’ll be expecting more first-team faces to be thrown in the mix.