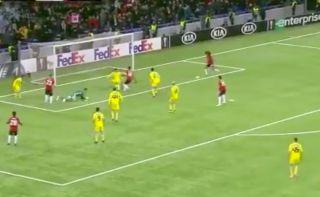 Tahith Chong won’t want to see the replay of his absolute horror miss against FC Astana any time soon.

The youngster missed a golden opportunity to double Manchester United’s lead in Kazakhstan. Under a minute later, Astana equalised through Dmitri Shomko.

Following a great move from United, left-back Luke Shaw found himself inside the box and poked through to Chong inside the six yard box.

The 19-year-old slid his foot under the ball and somehow chipped over the bar. His miss has proved costly as well with United suddenly going 2-1 down against the champions of Kazakhstan.

See his shocking miss below, courtesy of BT Sport:

Not even a minute later Astana equalise 😶 pic.twitter.com/zGla6jX0cL