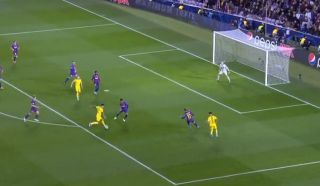 Jadon Sancho may not be enjoying himself at Borussia Dortmund at the moment, but the England star still managed to score a beautiful goal against Barcelona in the Champions League last night.

The 19-year-old started the game on the bench while Dortmund found themselves three goals down after 67 minutes at Camp Nou.

Lucien Favre decided to bring Sancho on at half-time and he scored an excellent individual effort with 13 minutes remaining, but it wasn’t enough for the German outfit, losing 3-1 against the La Liga champions.

The defeat shouldn’t take away from the individual quality of Sancho’s goal.

Watch the beautiful goal below, courtesy of BT Sport:

Disappointment for Dortmund in Barcelona…

Such an immense talent 💛🖤 pic.twitter.com/mg10Nog9Mm

Favre went on to claim Sancho was not ‘focused’ enough to start against Barcelona and that is likely to lead to more transfer speculation, with the Telegraph already linking the winger strongly with Manchester United, as well as other top clubs.

“I explained to him [why he wasn’t starting] before the game,” Favre said (via the Metro). “I told him it was a really difficult game here in Barcelona, and we needed players that were really focused and that went on the pitch really focused.”

Last night’s defeat leaves the Bundesliga side third in Group F but they are level on points with Inter Milan ahead of their final group game against Slavia Prague on December 10.