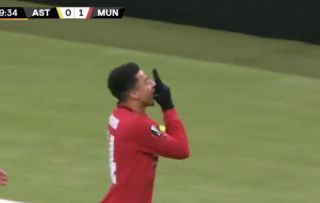 Jesse Lingard has opened the scoring for Manchester United against FC Astana.

The Red Devils deserve the lead after 10 minutes and look like they could push on and cause the hosts more problems.

Astana have scored just one goal in the Europa League thus far, and Lingard’s finish was the 18th they’ve conceded in the competition this term.

A win tonight could see United top their group.

With all the youngsters getting a run against Astana, it will do them the world of good to come away with a win.

Lingard was named captain for the game tonight which caused some fans to scratch their heads, though he answered his critics with a superb finish as seen below, courtesy of Virgin Media Sport:

Great strike from the #MUFC captain!