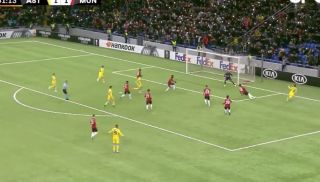 It was going so well up until the second-half with Man Utd leading 1-0 at the break. Now Astana lead and Ole Gunnar Solskjaer’s youngsters have a big task on their hands.

We shouldn’t be too critical of the kids. A lot of lessons will be learned tonight and all you can do is hope they’ll put them to good use in the future.

It’s a great experience for the young lads, but the game itself has been played at a training ground pace.

Astana’s second goal saw Di’Shon Bernard put the ball into his own net. He was seen then seen laying with his face in the tuft until Axel Tuanzebe came over and picked him up.

It was an unfortunate one!

United have lacked purpose on the ball since the interval but hopefully they can turn this around.

Watch Bernard’s own goal below, courtesy of Virgin Media Sport: