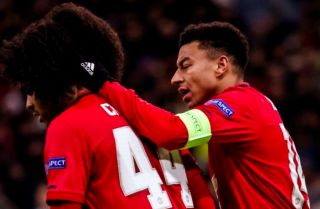 The Reds looked comfortable in the first-half and took a 1-0 lead into the break thanks to captain Jesse Lingard’s goal.

But the game turned when Tahith Chong somehow missed an open goal from close range to double United’s lead. Just seconds later, Astana had gone up the other end and equalised, completely shifting the momentum towards the hosts.

Chong failed to impress United fans this evening and some think he could benefit from a loan spell elsewhere.

At just 19-years-old, Chong is still very young and has plenty of time to develop. But he has struggled for game time under Solskjaer this season and it will be difficult for him to find a way into the team on a regular basis.

The Dutchman hasn’t shone yet in the first-team for United, but has been very impressive for the u23’s.

Perhaps a loan spell with guaranteed first-team football will allow Chong to grow his game maximise his potential.

I really enjoyed watching levitt, garner and gomes they should all be getting more minutes now especially with are lack of mids laird was good also but not getting in front of awb. Chong needs a loan if he signs in championship i think.

I don’t want us to sell Chong. I think there’s a player there so I want him to go on loan.

Players like Serge Gnabry are a good example of not giving on youngsters. 3-4 years is a long time and Chong night becone a different player with some physically and maturity.

Chong is still 19. While that miss was horrendous, lack of a final pass is evident in so many so-called 'top young players'.

He still has a future at United (if he stays). He needs a loan spell in the Eredivisie. A club like Heerenveen will always want to have players like him.

Tahith Chong could become a very good player, but he is lacking so much at the moment. Need to play regularly in the dutch league or something. I think he is moving this summer without signing a contract. I would prefer him to sign and leave on loan.

Chong is the ultimate “this player has to get games player. Get him a loan

As I’ve perviously said we have some talent in our academy but these lads need loans. Gomes, Chong, Levitt and Laird should be out on loan atm. We have wasted 1/2 years of Gomes and Chongs career because we have refused to send them out to get experience. #mufc

Would definitely look at Ethan Laird as back up to Wan-Bissaka, he's been quite impressive so far despite the result, Chong needs a loan out, lad plays so well for U23's but can't quite do it in the seniors, a loan might be good for a few of these academy players.

Chong really needs a loan to build his confidence. Man can't even score from an empty net ffs