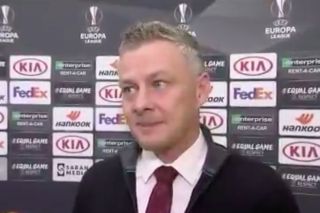 Ole Gunnar Solskjaer says this afternoon’s Europa League clash against FC Astana will be a ‘great education’ for his youthful side.

United have travelled with just four senior players to Kazakhstan with the rest in Manchester preparing for Sunday’s Premier League game against Aston Villa.

There are seven teenagers and nine academy products in the starting eleven and Solskjaer thinks this is an exciting team.

The United boss also explained how this is the next step in many of the youngsters’ progression and an opportunity to shine in front of a large crowd.

United have prioritised Sunday’s match at Old Trafford and there is little pressure on the young players to get a result with the Reds already qualified for the Europa League knockout stages.

We hope the debutants can seize their opportunity and impress the United boss.

"For the kids, it's a great occasion."

Time for a pre-match word with the boss… #MUFC #UEL pic.twitter.com/EcENKkqz5q