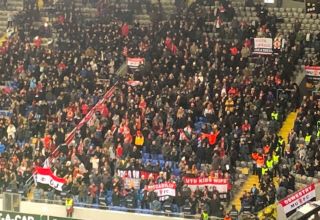 950 away fans have made the 6000 mile round trip from Manchester to Nur-Sultan, a tremendous effort for a game with little significance.

Ole Gunnar Solskjaer’s side have already qualified for the knockout stages of the competition, but United fans have still made the long trip in their numbers.

Conditions are brutal for fans with temperatures threatening to drop below -20 degrees Celsius. The game, however, is being played under a roof on an artificial pitch.

The Reds have given some of their loyal fans something to cheer about in the first-half with captain Jesse Lingard opening the scoring. It’s the first goal the midfielder has scored for United in 28 games.

3000 miles from Manchester. 950 away fans in Astana. Cracking following. pic.twitter.com/iifDnlyMsu