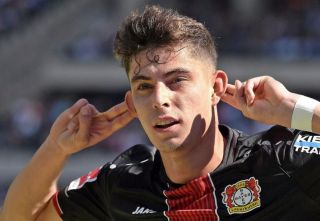 Manchester United are among seven clubs reported to have held talks with Kai Havertz over a potential transfer.

The German star, 20, has been in impressive form for Bayer Leverkusen so far this season.

According to German newspaper Bild, his agent has already been in contact with a number of clubs — including Liverpool, Chelsea, Man City, Bayern Munich, Barcelona, Real Madrid and Man Utd.

Bayern usually target the best young talent in the Bundesliga and, being a Germany international, Havertz may see a move to the Allianz Area as the next big step to better his promising career.

That said, he doesn’t sound put off by a move abroad.

The report hints at a January deal, although Leverkusen are unlikely to allow their best player leave midway through the deal, and it won’t want to risk a shaky start elsewhere which could knock him out of Joachim Low’s plans for Euro 2020.

It is noted that the financial aspect of his next move is not the most important part of a deal.

Kai Havertz can do mad things with a football at his feet 🤯pic.twitter.com/Zh8AzW2YTY

Going on these reports, Havertz has plenty of options to join one of Europe’s biggest clubs.

Havertz told Marca (via the Mirror) recently that he might be moving away from the Bundesliga, stating he’s capable of playing in La Liga or the Premier League:

“I think I’ve picked up enough International experience at Leverkusen… I know the rhythm of these international matches and I’m confident that I can go abroad at any moment and play at clubs outside of Germany.

“For the moment, I want to have a good season. Afterwards, we’ll see.”

The attacking midfielder has three goals and one assist in his last 16 appearances for Leverkusen this term, having scored 20 and registered seven assists last season.