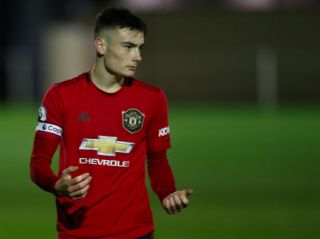 Ole Gunnar Solskjaer has named an extremely youthful side to take on FK Astana in Kazakhstan this afternoon.

READ MORE:  Video: Sancho shows Man Utd what he can do with cracking goal against Barcelona, amid transfer rumours

It’s fantastic to see so many youngsters get a first-team opportunity, with Luke Shaw, Axel Tuanzebe, Lee Grant and captain Jesse Lingard the only senior players.

This afternoon’s game is a great chance for James Garner, who has had sporadic first-team minutes this season. to impress Solskjaer alongside Welshman Levitt in midfield.

Tahith Chong and Angel Gomes have not been able to break into Solskjaer’s side this season, but they get their chance in an exciting front three with Mason Greenwood.

See what fans had to say about the team news:

Whenever #Greenwood has played he has scored or assisted that will definitely guarantee goals.#GLG Garner-Levitt-Gomes in midfield will not be short of creativity.#Laird due to injury could not break into first team squad earlier will now capitalize.#MUFC #UEL #FCAMUN #GGMU

I'm most excited to see Laird , Levitt and Gomes. Greenwood we already know what he can do. Hope he leads the line well.

Cannot wait to see today's game. Although would've loved to see Ramazani start instead of Chong, he's been on fire for the u23 this season. That Levitt – Garner double pivot is the shit you gotta watch out for. Already talked about how good Ethan Laird is, can't fucking wait https://t.co/PcoiZoIqLe

Garner and Levitt in midfield together. That’s something I can’t wait to see. Both exciting in their own right and it’s a position United are so short in. Also, Bernard and Tuanzebe. Can’t wait for this game. https://t.co/7ESPl1QKHn

Garner, Levitt & Gomes starting, can’t wait to watch the game 🙌🏻 I hope ramazani comes off the bench and gets some good game time too 🤞🏼 https://t.co/jHQNa5GiK3