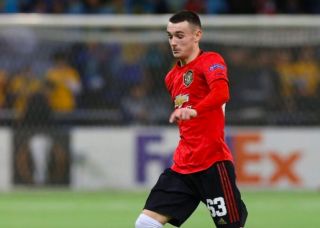 Dylan Levitt made an encouraging debut for Manchester United in the disappointing Europa League defeat to Astana.

The Welshman was one of three youngsters to be handed their debut by Ole Gunnar Solskjaer and looked composed on the ball alongside James Garner in midfield.

Levitt will be frustrated that his first game for United has ended in defeat, but the young Reds should keep their heads up high after putting in a decent showing.

Solskjaer picked an extremely inexperienced side as the results wasn’t of paramount importance with United already qualified for the Europa League knockout stages.

Levitt was one of the standout performers for United, particularly in the first-half as he and Garner dictated play in midfield.

Although the youngster could perhaps have been more adventurous on the ball at times, he completed more passes than any other player on the pitch.

Dylan Levitt completed 100 passes vs. FC Astana, more than any other player on the pitch.