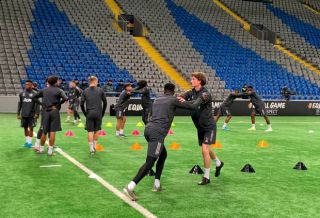 Manchester United are back in action as they face FK Astana in their penultimate match of the Europa League group stage campaign and Ole Gunnar Solskjaer has named a young side to take on today’s opponents.

There are three debuts in the starting line-up which marks a special occasion for those players involved and they will all want to make sure United come away with a win.

Lee Grant starts between the sticks behind a very young defence. Axel Tuanzebe and Luke Shaw will be expected to lead from the back.

The midfield looks exciting with young duo James Garner and Dylan Levitt tasked with pulling the strings and unleashing the attacking players.

Tahith Chong, Jesse Lingard and Angel Gomes will be expected to create countless opportunities for Mason Greenwood up front.

United have a perfect defensive record in the Europa League this season after managing to keep a clean sheet in their opening four matches in the competition — no side have ever kept this run going for the first five group stage games.