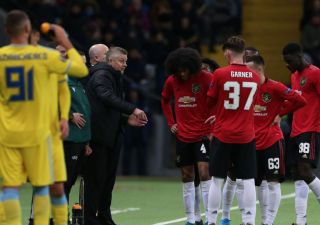 In what resembled nothing much more than a glorified friendly, Manchester United slipped to an unfortunate defeat in the backwaters of Kazakhstan.

Astana scored twice in quick succession to claim victory in the Europa League. Ole Gunnar Solskjaer’s very young selection acquitted themselves well but ultimately had nothing to show for it. Here are our player ratings:

Should arguably have done better for both goals. At 36, he is old enough to be most of these players’ father but was solid when called upon. A nice moment for him to make a first start for the club.

Showed constant adventure and endeavour down the right and really shone on his senior debut. United probably should have used him more but he is highly regarded and you can see why. Always wanted the ball and did well. I’ve a feeling we’ll see a lot more of him in future.

Enjoyed an encouraging return to first team action as one of the senior players despite only himself being 22. We know there’s a player in this lad, he’s proved that on the biggest stage and the fact he’s only just coming back from injury is probably why he was below his best. Did little wrong.

The teenage debutant didn’t look out-of-place in the first half but having almost scored an own goal, he then inadvertently deflected one in past Grant. He was unlucky but Di’shon didn’t cut the mustard I’m afraid.

On his first start in almost 100 days, there were glimpses and he would have got an assist but for Chong’s profligacy. I just feel Shaw should be doing more and he faces being frozen out by Solskjaer. Did little to suggest he’ll keep his place for Villa with Brandon Williams’ emergence forcing Shaw down the pecking order.

His touch, distribution and vision is a sure sign of a proper player. Acquitted himself well and was full of energy on his debut but faded once the equaliser went in. I was impressed with him though and he stood out as a promising and emerging talent.

With Levitt and Garner, United finally had a midfield two worthy of the name after weekend woe. He seemed to get tired, too, but we know he’s got the talent and he’ll be on the fringes of the first team. Did well.

Full of running but too predictable, always cutting onto his left. The game turned on his sitter when he inexplicably missed from two yards. You don’t want to be too harsh on a young player, he’s still learning but I struggle to see a future for him at Old Trafford. A performance to forget I’m afraid.

This would have been an 8/10 showing if not for his (lack of) end product. By far the most impressive in Red, he forced the Kazakh keeper into a string of saves and was involved in Jesse Lingard’s goal. He almost scored from a free-kick and despite his size he stood strong. Impressive.

Scored his first goal since Arsenal away in January to build on a decent second half at Sheffield United. Captain for the night, Lingard have done enough to start against Villa. Scored a very good goal but his decision-making could have been better.

Maybe he’s better as a sub. It wasn’t Greenwood’s night, he spurned several chances and was a bit selfish. He became anonymous as United’s collective efforts wilted

Another debutant, the 19-year-old worked hard and played with plenty of effort having replaced Chong

No rating. A debut

Another to make his United bow but no time to make an impact.