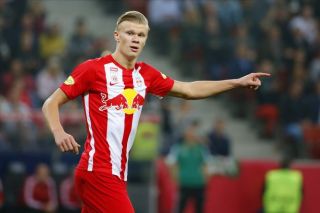 It sounds like Man Utd will go all out for Erling Haaland in January.

Ole Gunnar Solskjaer needs more firepower up front with Anthony Martial still too inconsistent to lead the line and Red Bull Salzburg hitman Haaland is reportedly the man at the top of the manager’s wishlist this Christmas.

Haaland, 19, has scored 26 goals in 18 games this season and that sort of form will always attract interest from the biggest clubs in the world.

United will need to be smart with their negotiation techniques to get ahead of their rivals to sign Haaland, and according to the Times, the Red Devils will launch a bid in January.

The Norwegian striker is expected to cost north of £60m with RB Salzburg reluctant to part with their talisman midway through the season.

The main reason United apparently want to strike a deal in January is they feel it will be tougher to sign Haaland in the summer when his price tag is likely to rise.

Arsenal and Liverpool have been listed as potential buyers, as per Sky Sports, but I wouldn’t worry too much about the former. The Gunners haven’t got the same power as United when it comes to the transfer market, though on the hand joining the European champions may appeal to Haaland.

The Times report adds that Leicester City’s James Maddison and Borussia Dortmund winger Jadon Sancho are also on his wishlist.

Although, a move for Maddison is unlikely to happen in January and Sancho supposedly favours a move to Spain.