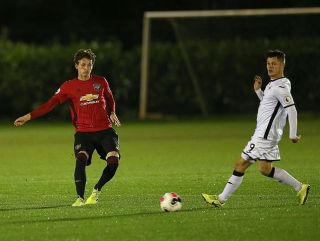 We are delighted to hear Man Utd defender Max Taylor has received his first senior call-up just 12 months after having chemotherapy treatment for testicular cancer, as reported by the Manchester Evening News.

The game kicking off at an earlier time than usual (3.50pm) and, by the sounds of it, we’re going to see a young team start with United already qualified for the knockout phase of the Europa League.

Taylor only returned to training in September after getting the all-clear from medical staff.

This is a remarkable achievement for Taylor and we hope to see him make his first-team debut on Thursday.

According to BBC Sport, first-team coaches Michael Carrick and Kieran McKenna have stayed in Manchester and will work with most of the first-team players before Sunday’s Premier League encounter with Aston Villa at Old Trafford.

That means Nicky Butt is traveling with Solskjaer for the trip to Kazakhstan.

Butt, head of first-team development, will know most of the young players in the squad from looking after the youth teams.