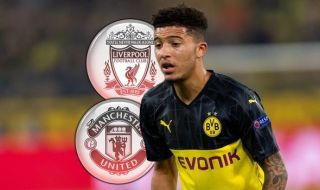 The Jadon Sancho rumours are going nowhere now that Manchester United believe they are leading the race to sign the Borussia Dortmund and England winger.

While using the Bundesliga as a platform to show the world his talents as a rising footballer, Sancho has been linked with a move to Old Trafford for the past year.

A new report from James Ducker of The Telegraph claims United fancy their chances of landing Sancho, despite interest from a host of Europe’s top clubs.

Even though United are likely to go a second year without Champions League football, the club is apparently optimistic that they will win the race to sign Sancho, beating rivals Liverpool to his signature.

Real Madrid and Barcelona are also listed as interested parties in the latest report on Sancho.

The Telegraph state that Liverpool are eyeing a move for PSG starlet Kylian Mbappe, which would go down as the biggest deal of the summer should it happen, though I wouldn’t hold my breath about that one when Real Madrid are likely to join the race for the Frenchman’s signature.

Arsenal won’t be able to compete with United for a player that is likely to cost north of £100m, and the report goes on to claim Sancho isn’t happy at Borussia Dortmund as things strand.

There is nothing to suggest a transfer is imminent — as early as January — and if I was a better man I wouldn’t lump on Sancho to leave Dortmund until the summer.

It would be a terrific signing for United and a surprise if they can manage if without Champions League qualification.

Man City have reportedly asked to be kept in the loop over their ex-youth player, while PSG’s interest has cooled on Sancho.

That could change if they lose Mbappe in the summer.