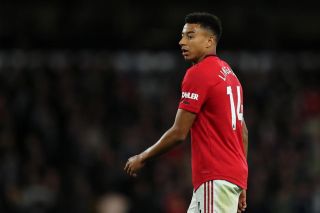 Jesse Lingard gets a lot of abuse on social media.

It’s not just because he’s gone over nine months without contributing a single goal for the club. The England international has been made a scapegoat for years.

In my opinion, his behaviour on social media doesn’t do him any favours. It doesn’t offended me personally but you can tell by the abuse he gets on Twitter that his dancing and clothing range tips people over the edge.

The biggest factor is that he’s not backing it up on the pitch. And that I can understand.

Lingard admits that he has had to develop thick-skin, but it is much easier to deal with criticism if you don’t subject yourself to it.

“There are a lot of things on social media, with people saying nasty things. You can’t get drawn into all that stuff,” Lingard told the UTD podcast.

“I don’t read that stuff, I don’t read papers. That’s why it’s tough for young footballers coming through now, they’re so attracted to social media and what people are saying about them, they don’t actually know how good they are themselves. For me, I just don’t read anything online.

“When I first got into the first team I started reading things like that, but now I still don’t read it if it’s going well.

“One person can hate you and one person can love you, that’s just life. You have to get on with it. We’ve got to play in front of 75,000 people every week. At United, it’s the biggest club in the world, so you get criticised either way. For us as players, we’ve just got to get on with it and be thick-skinned.

“I love football, I love training, I love playing, I love the fans, the stadiums. I love everything about football. For me, I’m an out-and-out footballer.”

Lingard has started just four Premier League games this season and doesn’t seem to be a favourite under Ole Gunnar Solskjaer anymore.

Perhaps his confidence is low because social media can be a struggle at times — especially for people in the spotlight who are prone to criticism.

Twitter and other platforms can give users a sense of anonymity and that comes with a cost.