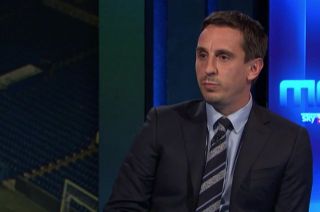 Gary Neville didn’t hold back when analysing Man Utd’s 3-3 draw with Sheffield United ahead of Aston Villa vs Newcastle on Monday Night Football.

The former Manchester United captain picked out three players for criticism in particular.

It may have been a thrilling encounter for the average neutral, but for United fans it was a difficult watch. The first 70 minutes were a complete write off and it makes you wonder how the players even needed motivation knowing the Blades were going to be a tough opponent, in their own ground, and already causing upsets in the Premier League this season.

However, the Red Devils fought back from being two goals down to taking a 3-2 lead after scoring three goals in seven minutes.

Ole Gunnar Solskjaer decided to take off Anthony Martial for Axel Tuanzebe, who played as a defensive midfielder, though in hindsight the manager may wish he wasn’t so conservative with his approach to close out the game. It invited pressure and through poor defending United conceded a stoppage time equaliser.

After it took United time to get going in the final third, Neville took issue with the attacking trident deployed by Solskjaer. Marcus Rashford, Anthony Martial and Daniel James all came in for criticism on Sky Sports.

“The lack of movement from Martial, Rashford and James is a joke,” Neville said (via The Sun). “It really is an absolute joke. All game. Nothing at all from them.

“When I first broke into the team I had people setting the standard and left you knowing where to go.

“Mata is on the bench, Pogba is injured, Matic is looking to get away, the experienced players at the club at this moment in time are in turmoil.

“They haven’t got futures at the club, some are injured. Essentially they are all out on that pitch. young, together.

“They don’t know how to approach a Premier League away game. They don’t understand how it’s different from Old Trafford. They haven’t got the experience or maturity.”

Neville was notably angry during his commentary on Sunday. You could hear the United fan in his voice as he watched on in disbelief, and we don’t disagree with a word he says on the issue.