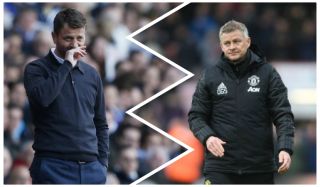 These are undoubtedly patience testing and tricky times at Manchester United. Damningly epitomised by Ole Gunnar Solskjaer seemingly mightily relieved that his side had managed to come away from Sheffield United with a point, who on the corresponding weekend last season were throwing away two points in stoppage time at to be relegated Rotherham United.

In his post match television obligations, Solskjaer eulogised just how far his United team had made strides in character and resolve, using last season’s 4-0 white flag at Goodison Park as his reference point. For starters, De Gea, Lindelof, Jones (ironically hauled off at half time on Merseyside too), Fred, Rashford, Pereira, Martial, Mata, Lingard and Young all made both of those squads.

United were deprived of Shaw, Dalot, Matic, Pogba, McTominay and Romero in Sheffield, but they were also in the eighteen which surrendered to Marco Silva’s side just seven months ago. So, for Solskjaer to make that comparison and laud a meteoric supposed culture shift is a distortion of the truth- that his squad is largely comprised of the same core. This crop are four points worse off than Jose Mourinho’s ill-fated campaign last season and he paid the price, enough was enough.

Of course, I was absolutely made up for Brandon Williams, given a thankless task in the Sheffield bearpit next to ‘Calamity Jones’, and Mason Greenwood for pulling United back into the contest from absolutely nowhere. But let’s not beat around the bush, United were powderpuff, gutless, maybe even overawed by Chris Wilder’s band of Football League brothers for a good 70 minutes. 37 year old Phil Jagielka was shelving any retirement plans and could have played until 57 the way United disjointedly quivered in the lion’s den. United were that poor.

Back in time, Adnan Januzaj came to the rescue of even David Moyes at the Stadium of Light, which was seemingly the making of him, but that did not excuse the horror performances in the end, it just shows that although promoting youth, like Ole is evidently attempting, has its merits, it is neither the only saving grace nor granting immunity from justified criticism.

Pre game, Solskjaer had publicly called for United’s fame craving ‘stars’ to become ‘boring’ on social media: While the millions of Instagram followers and sponsored posts may rake in the big bucks for the club, that cannot be substituted for Wilder’s symbols of fight, guts, grit and yes, even quality. There was so much to admire about them- to a man everyone knew their exact roles and limitations, their fans have a team to be proud of.

At Brammall Lane, Ed Woodward and Sir Alex Ferguson were captured on camera clashing, dare I say the pressure is being cranked up a few notches while a certain Argentinian is hanging by his telephone?

What is Dick’Ed trying to say to Fergie? The latter would have him in a bag tomorrow morning if he had his way. pic.twitter.com/U7Dy78qU6A

A calculated hunch, based on credible match going fans and the rather more vociferous, often poisonous stratosphere of the worldwide web, dictates that, more or less, there isn’t an expectation that Ole Gunnar Solskjaer is the ‘man’ to revive United’s fortunes, more a collective hope.

Which got me thinking of a striking parallel, which coincided with when it all started to unravel at Manchester United.

It’s the horrendous 2013-14 season.. There was a sleeping giant club, which spent an absolute shed load on transfers trying to remedy their prevailing predicament of being in their neighbour’s shadow, with an owner unconvinced by the manager’s and club’s credentials to secure the lucrative, desperately craved Champions League football.

After the sale of Gareth Bale to Real Madrid, Andre Villas-Boas was sacked by Tottenham after a 0-5 home drubbing at the hands of Brendan Rodgers’ Liverpool. This was after £107m was spent on Paulinho, Nacer Chadli, Roberto Soldado, Etienne Capoue, Vlad Chiriches, Christian Eriksen and Erik Lamela. Only the latter two remain from that scattergun approach to transfers, although the Dane’s future is far from certain.

Spearheaded by a man with no prior managerial experience in Tim Sherwood, promoted from the rather flowery termed ‘technical coordinator’ of the under 21 squad, he was assisted by Les Ferdinand, Chris Ramsey and Steffen Freund, who was Villas-Boas’ assistant. Between them, they amassed 313 appearances for Tottenham, which has eerie resemblances to the current United setup: They have a manager whose main endearing quality is simply donning the shirt (Solskjaer/Sherwood), a first team coach who stayed with the club after a previous failed tenure (Carrick/Freund) and a relative novice to senior football (McKenna/Ramsey).

Sherwood was given an 18 month contract with the task of restoring not only results, but pride in the shirt, liberating players from taxing dictatorial methods and giving youth a chance. Fast forward six years, swap white shirts for red and you capture Solskjaer’s remit to a tee.

In his first league game, a few days after appointment, Sherwood gave Nabil Bentaleb a league debut and his team was packed with youthful exuberance, including promoting from the youth in naming Ryan Fredericks on the bench as well as Bentaleb.

Ultimately, Sherwood paid the price for failing to deliver Champions League football with a sixth place finish in the 2013-14 season and only served to warm the seat for a certain Mauricio Pochettino to enter the fray.

What happened next at a triumvirate of White Hart Lane, Wembley Stadium and the Tottenham Hotspur Stadium was nothing short of extraordinary. The likes of Dele Alli and Harry Kane can only attest to the widely held view that Pochettino not only improves players, but he can make them elite players. Kane went from four loan spells at Leyton Orient, Millwall, going goalless at Norwich and disappointing at Leicester to transform into a serial marksman for club and country and Alli was plucked from League 1 obscurity to rise to prominence due to Pochettino.

Let’s be honest, for all the ‘what trophies has he won’ arguments, the vast majority of supporters would have snapped off not just hands, but lower limbs too if anyone was to foresee that Pochettino would be a readily available free agent by November 2019 as he was guiding his Spurs team to their pinnacle of striding out at the Wanda Metropolitano in a Champions League final.

This is no ‘Ole out’ piece by any stretch of the imagination, more an accurate assessment that the pressure will be raised on Solskjaer with every passing backward, even sideways step for as long as Pochettino is available. No least because there is a full time vacancy at Bayern Munich and Pochettino would be deserving of those links.

Daniel Levy had seen enough after missing out on Champions League football and it remains to be seen whether United, most probably via the Europa League route, can rid themselves of the Thursday-Sunday schedule for the more appetising, romantic and pleasurable Tuesday-Wednesday comforts the Champions League brings. For a club prioritising money over on field success, missing out on the Champions League riches will eventually hurt the coffers- lucrative noodle and tractor partnerships can only bring so much before questions being to be asked, just ask Chevrolet.

It begs the question, will United hold their nerve and allow Solskjaer to complete his long-term vision, or whether he actually is nothing more than the next Tim Sherwood, simply warming Mauricio Pochettino’s seat?