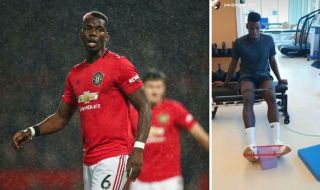 This won’t go down well with Man Utd fans.

Paul Pogba reportedly does not want to play for Manchester United despite being declared fit to play.

Paco Gonzalez, director of Cope’s radio show Tiempo de Juego (via Sport Witness) claims sources from inside the Old Trafford dressing room say the French midfielder is fit after recovering from an ankle injury, but does not want to play for Ole Gunnar Solskjaer.

If true, of course, that is beyond disappointing for a player once tipped as captain material.

Apparently it’s down to Pogba wanting leave the club to join Real Madrid in January.

Solskjaer maintains that Pogba is still recovering from injury, though.

It’s now a matter of each to their own when it comes to who is most believable, but I don’t think many United fans expect the former Juventus star to be at Old Trafford next season which could be a sign.

Pogba has not played for United since the 1-1 draw with Arsenal at the end of September. He spoke to RMC Sport earlier this month to give an update on his absence, saying, “I’m gutted. To see the team lose without being able to play is the worst. I would like to be back to help them but the most. Important thing is to heal.”

The ankle injury hasn’t stopped Pogba from enjoying himself away from football. A video emerged online last week showing Pogba playing basketball, and Solskjaer came out to defend the France star.

Solskjaer said (via Manchester Evening News): “Did I say last press conference, we don’t play basketball. I don’t see many basketball players tackling ankles twisting and turning with studs, he’s not ready to train, no.”

Whatever happens, we’re getting sick and tired of the Pogba circus. He has never seemed dedicated to United.