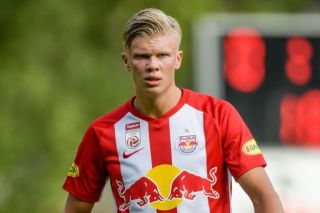 Manchester United are optimistic about their chances of signing Red Bull Salzburg striker Erling Haaland, according to The Athletic’s David Ornstein.

The reliable reporter shared the news on social media on Monday afternoon and claimed that United are ‘convinced’ he’ll make the move to Old Trafford to link up with fellow countryman and former manager Ole Gunnar Solskjaer.

However, problems could arise for the Red Devils.

Ornstein also revealed that the involvement of infamous agent Mino Raiola could become an issue in any possible deal for the 19-year-old.

READ MORE: Pochettino in no rush to return to management amid Man Utd links

Haaland will be the most-wanted striker next summer and it’s clear from his performances in the Champions League this season that he has a big future in the game.

Marcus Rashford is enjoyed his new role on the left wing while Anthony Martial is inconsistent at best as a central forward. Solskjaer might give the Frenchman until the end of the season, but our thinking would be a player like Haaland comes in to replace him immediately.

The Norwegian youngster is already built for the Premier League. He’s tall, strong and extremely athletic.

This update suggests United feel Haaland would be keen on a move to Old Trafford, but his agent could stand in the way of that happening.

Hopefully Solskjaer can string something together and get this future star to United!