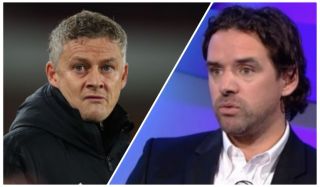 The former Manchester United midfield felt Ole Gunnar Solskjaer’s final substitution gave the hosts help to get back into the game.

Sheffield United went two goals ahead before the Red Devils enjoyed a frantic 10-minute spell with Brandon Williams, Mason Greenwood and Marcus Rashford all scoring — but the Blades netted a late equaliser to give the fixture more drama.

United were awful for the first 70 minutes and never really got going in the first half. There was little improvement after the break and you could tell Sheffield United could smell blood.

READ MORE: Opinion: Will Solskjaer ever be anything more than what Tim Sherwood was to Tottenham?

Hargreaves believes it was the worst he has seen United play this season and there won’t be many who will disagree with the former England international.

“Good luck making sense of that,” Hargreaves told the Premier League (via the Metro). “For 70 minutes they were dreadful, they really were dreadful — that was probably their worst performance of the season.

“The first half was a disaster, nothing short of. Sheffield United should have been up by more goals, but he [Solskjaer] made changes.

“The one thing you can’t take from it is that the young kids stepped up, so almost kind of out with the old, in with the young guys. That’s what you’ll get from today. Because his team shape and the inclusion of Phil Jones did not work.”

Solskjaer’s third and final substitute saw Axel Tuanzebe replace Anthony Martial. The manager decided to play Tuanzebe as a holding midfielder on his return from injury, and Hargreaves felt strongly about that.

He added: “If you think back to the last goal from Sheffield United, Tuanzebe is a centre-back, he came on the pitch and played in midfield to shore it up. Really you would do that with a more experienced player, to come in.

“That’s not even his natural position, but he wanted someone in there to protect and essentially it didn’t really work. Really, under the philosophy of Man United and Sir Alex, you probably would have thought with the game as it was, there was a fourth goal in it for United.

“Get the fourth and kill it off. But because he didn’t have that experience in there he put on Tuanzebe to protect and it went the other way. I really like him, but that last sub maybe didn’t go the way Ole wanted.”

We knew giving Solskjaer the job that he was inexperienced at this level, so he is bound to make mistakes and the club can only hope he learns from them.

Hargreaves’ criticism is fair and completely justified. It wasn’t Solskjaer’s finest hour but several players need to have a good look at themselves.