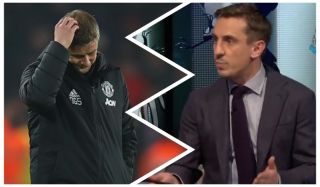 Gary Neville is of the belief Ole Gunnar Solskjaer must spend in the January transfer window to save his job as Man Utd manager.

The former club captain believes Manchester United lack experience in the current squad and has called on his ex-teammate to be ‘ruthless and ‘selfish’ in the upcoming transfer window.

If he doesn’t spend in January, Neville thinks Solskjaer is at risk of losing his job before his influence at the club is seen on the pitch.

United took a point from their trip to Bramall Lane on Sunday after a 3-3 draw with Sheffield United. The hosts earned a point thanks to Ole McBurnie’s stoppage time equaliser.

READ MORE: Opinion: Will Solskjaer ever be anything more than what Tim Sherwood was to Tottenham?

Neville states that the performance against the Blades was another example of Solskjaer’s side lacking maturity and experience, and has urged the United boss to make good use of the transfer market when it reopens.

He’s not wrong when you consider how easy teams find it to crawl back into games against United. We have struggled all season to finish lesser sides off.

“They haven’t got the leaders and the people around them that set the standard. [Juan] Mata is on the bench, [Paul] Pogba’s injured, [Nemanja] Matic is looking to get away. They’re all out on that pitch, young together.

“They don’t know how to approach a Premier League away game, they haven’t got the experience or the maturity.

“He [Solskjaer] must demand it [money to spend]. He’s not going to be around to see the fruits of their labour.”

“They haven’t got the leaders around them who set the standard.”@GNev2 says Ole Gunnar Solskjaer ‘has’ to spend Manchester United’s money in January – despite the availability of Mauricio Pochettino. 💰

Neville was critical of United’s midfield which consisted of Andreas Pereira and Fred on Sunday. He added: “I think I was just disappointed with their approach to away performances this season. The midfield I’m not going to go into, because that’s not a midfield. What disappointed me most was the lack of penetration and lack of runs, with or without the ball, from the front three.

“You’re away from home and you’ve got to earn the right to play. That front three are the spark, they’re the ones who can win the game for their team. The reaction when they give the ball away is a joke.

“The reason I’m so unforgiving of them is because the front three for City and Liverpool are absolutely outstanding and fight for every ball.

“Rashford, Martial and James, they’re not bad lads. But there’s something fundamentally wrong there, in that first 70 minutes, that can’t happen at that club.”

Dropping points at Bramall Lane will put more pressure on Solskjaer and with Mauricio Pochettino available after being sacked by Tottenham, it’s perfectly reasonable to wonder how long the Norwegian will last in the hot seat.

We are not calling for a change in management but the results and performances must improve.

“It was the most predictable thing [Pochettino links to United]. When Van Gaal was sacked, I said Pochettino should have been appointed ahead of José Mourinho.