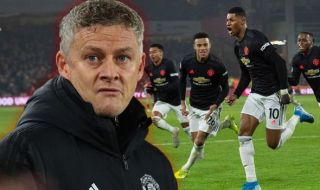 Whether you look at Sunday’s result at Bramall Lane as a point gained or two points dropped, or indeed a mixture of both – the same problems remain for United. Apart from the 10-minute spell in which they netted three times, this was a truly abysmal performance. Frankly, it was up there with those at West Ham, Newcastle and Bournemouth – adding to an ever-growing collection of performances of a similar ilk (and not just this season, either).

Tempered expectations going into an away game at a newly-promoted team, despite a relatively good spell of pre-international break form, is an indictment of where United currently are. Perhaps you could say likewise of Ole Gunnar’s Solskjaer’s decision to match Sheffield United’s 3-man defence with his team selection.

Phil Jones’ only starts had come in Europa League and Carabao Cup ties prior to Sunday’s game, there are reasons aplenty for that. All of which were again laid bare in a disastrous first half display, before being hooked at half time. Axel Tuanzebe may not have played since sustaining an injury in the warm-up before the Liverpool game, but he was still deemed fit enough for a place on the bench and ultimately for a late cameo here.

It’s late 2019, and the fact that Jones remains on the Old Trafford payroll – nevermind being selected to start a Premier League match ahead of a promising youngster remains a mystery. He flew into some crunching tackles early on, but ultimately it is a lack of basic defensive and footballing IQ that is most glaring – evidenced by the brainlessness displayed in the build-up to John Fleck’s opener. Would a more ruthless manager have seen the nightmare unfolding and substituted Jones after half an hour? Who knows? The fact that Chris Smalling is garnering praise for his display for Roma, makes Jones’ continued presence at the club even more baffling. Whisper it quietly but, for me, Harry Maguire’s form also continues to be a concern going forward.

Maguire is an upgrade on Jones and Smalling, no question. He’s not helped by the poor midfield he plays behind either. I just can’t believe anyone can look at him in so many one on one situations where we’ve conceded (and not against the world’s best strikers) and be impressed.

The manager must shoulder a significant portion of the blame for the woeful display, in the first 70 minutes at least. The decision to play Jones is one thing, whilst his continued faith in Andreas Pereira illustrates a persistent blind spot. It’s easy to be knee-jerk following poor performances, but this writer has been consistent in pointing out the clear quality deficiencies in the Brazilian. Even in the previous game against Brighton, where he scored the opener (albeit via a significant deflection), his flaws were obvious even in his supposedly favoured number 10 position. To continue an aforementioned theme, the fact such a poor player continues to start games for United consistently, is symptomatic of the wider issue of recruitment. Pereira would do well to start for most lower-half Premier League teams, nevermind one with loftier ambitions. He is not a number 10, and is most certainly not a central midfielder capable of acquitting himself well against a team as motivated and well-drilled as Sheffield United are. If fans can see that, Ole should know it, or at least you’d like to think so. We’re well aware of this squad’s current limitations and that a top 4 finish is fanciful, so why not give youth a chance by starting Tuanzebe in a 3-man defence and James Garner alongside Fred in midfield?

Aside from poor defending and questionable selections, United simply did not look up for a battle at Bramall Lane – something they would surely have known was coming. This is not a new phenomenon for this team, even going back to last season. Ole post-match made reference to the 4-0 drubbing at Everton in April, suggesting that this fightback highlights an improvement in team spirit and mentality. One would question whether or not such a lacklustre display would have come to pass, if that was the case. David de Gea was perhaps the only player to emerge from the first half with any credit, pulling off saves which limited the damage at the interval. United were abject in midfield, with passes going astray left, right and centre. They simply could not cope with Sheffield United’s incessant pressing and work rate, as seen when Pereira was easily dispossessed prior to Lys Mousset’s second goal. On the rare occasions United did get through midfield, passes were often overhit or Anthony Martial failed to make the ball stick upfront, failing to trouble the opposition centre-back’s in behind.

Credit should go to Ole for introducing Mason Greenwood, whose goal brought United back on level terms. The game was drifting away prior to Brandon Williams’ brilliant half-volley, which injected some much-needed impetus into United’s game. Greenwood’s leveller soon followed, before the front three combined for one of the only times in the build-up to Marcus Rashford’s tap in. At that point United had all the momentum and looked like scoring a fourth if anything. Three points would have been an absolute robbery, it seemed too good to be true – and so it proved. Rather than continuing to attack a tiring Sheffield United defence, the manager opted to withdraw Martial and attempt to see the game out with Tuanzebe’s introduction. United surrendered the momentum and invited pressure, so Ollie McBurnie’s last equaliser was no real surprise.

Having played so poorly and been 2-0 down after 70 minutes, you might look at this is a point gained. A win here would merely have masked the issues that continue to persist. The disappointment stemming from the result is not so much down to the failure to hold onto a lead, but rather the predictability of the display that preceded it. With Mauricio Pochettino now out of work, his presence on the managerial job market will loom over Ole Gunnar Solskjaer with every poor performance and dropped point – similar to the when Louis van Gaal continued to preside over a struggling United team in the 2015/2016 season, with Jose Mourinho waiting in the wings. The board allowed the Dutchman to limp on until the end of that season, but his departure was inevitable given the feeling of stagnation. If performances and results don’t improve, particularly with Spurs at home and City away to come, questions around the manager’s position will continue to mount. This is a very young squad that needs nurturing and coaching in order to establish a level of consistency in performances, so patience will be afforded to Ole. But just how much is the question, as one of the best young coaches in world football ponders his next potential move.