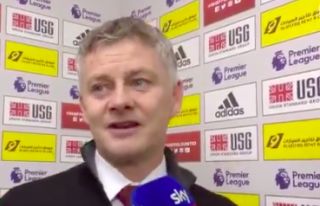 Ole Gunnar Solskjaer says he has ‘mixed emotions’ after the dramatic 3-3 draw against Sheffield United at Bramall Lane.

The United boss admitted the first seventy minutes in which the Reds trailed 2-0 was unacceptable, but lauded his side’s response

Quick-fire goals from Brandon Williams, Mason Greenwood and Marcus Rashford put the Reds in a most improbable lead after a disastrous first-half performance.

But a last minute goal from Oliver McBurnie prevented United from sealing a stunning comeback victory. The goal wasn’t without controversy either, with a VAR check on whether the striker was deemed to have handled in the build up.

United can have no complaints however, and sit ninth in the league table, nine points from the Champions League places.

See what Solskjaer had to say below:

"The difference between this year's team and last year's is huge. Last year we would've been 3, 4 or 5 down."