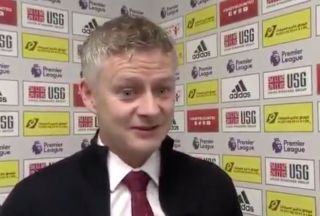 Ole Gunnar Solskjaer has explained the thinking behind his starting line-up for today’s game against Sheffield United at Bramall Lane.

The United boss has made one forced change from the side that defeated Brighton at Old Trafford before the international break. Phil Jones gets a rare start in place of Scott McTominay who is still nursing an ankle injury.

Solskjaer says Axel Tuanzebe is not yet ready to return from his injury and Jones is showing good attitude in training, hence why he earned a start.

Brandon Williams also retains his place at left-wing back, and is another opportunity for the youngster to impress the United boss and cement a regular first-team spot.

No matchday is complete without a pre-match word from Ole 💬#MUFC #SHUMUN pic.twitter.com/l8i4fcW0Mh