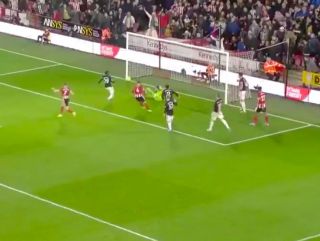 Sheffield United have taken a deserved lead against Manchester United early on at Bramall Lane.

The goal came from a defensive error from Phil Jones, who replaced Scott McTominay in Solskjaer’s side today with the midfielder out through injury.

Jones looks all over place on the left-hand side of a back three, and failed to deal with a simple long ball into the channel. He was easily shrugged off possession by Lys Mousset who found Lundstram in the box.

Lundstram’s shot was saved well by David De Gea but was followed up by John Fleck who found the bottom corner with his rebound.

United have looked way off the pace so far and are being dominated by a more energetic, organised Sheffield United side.

Mousset gets in behind Jones and pulls it back for Fleck to eventually scramble over the line.