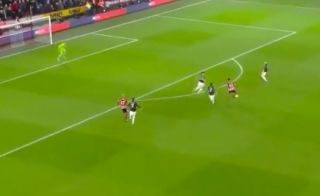 The pressure is beginning to mount on Ole Gunnar Solskjaer.

Sheffield United have deservedly doubled their lead against Manchester United at Bramall Lane.

After a disastrous first-half, United were looking to find a way back into the game with Jesse Lingard coming on for Phil Jones.

Instead, the Blades capitalised on a pathetic attempt at control by Andreas Pereira in central midfield.

John Fleck then played an excellent ball through to Lys Mousset who fired home beyond David De Gea into the bottom corner.

It was an excellent finish from the Frenchman, but, in truth, the performance thus far from United has been awful.

The Reds have rarely threatened the Sheffield United goal, instead looking ponderous in possession.

United look void of ideas and a comeback would be a shock at this point. Solskjaer’s men have already been defeated away to Newcastle, Bournemouth and West Ham this season.

An emphatic finish from the Frenchman! Man United have been second best all over the park to Sheffield United.