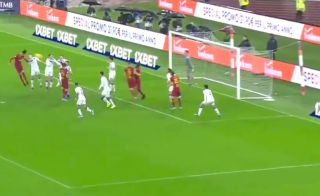 Chris Smalling is loving life on loan at Roma this season.

The central defender had a hand in all three goals for the Serie A giants today, who defeated Brescia 3-0 at the Stadio Olimpico.

Smalling opened the scoring after the break with a header early on in the second-half, and went on to contribute two further assists in the comfortable victory.

Remarkably, Smalling has become the first English player since David Beckham in 2009 to score two goals in the same Serie A campaign.

Smalling took a risk in making his season-long loan move, but seems to be seizing his opportunity and playing more regularly than he would have done under Solskjaer at United this season.

On fire in Italy 🔥pic.twitter.com/GimoQS2gxH

2 – Chris #Smalling is the first english player to score at least 2 goals in the same Serie A campaign since David Beckham (2008/09 for AC Milan). Lord. #RomaBrescia pic.twitter.com/bFw2fL86Ef