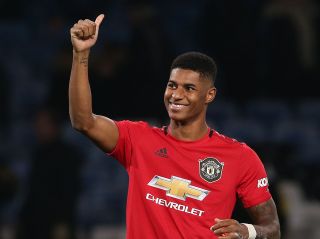 Marcus Rashford is widely considered to be one of England’s finest young attacking talents.

The 22-year-old has been a regular fixture in the Manchester United first team for the last few seasons.

Although he was dealt his fair share of criticism at the beginning of the season, Rashford has scored six goals and registered three assists in 12 Premier League games.

“He’s only going to improve,” the Norwegian said (via Manchester Evening News). “He’s a young boy, he’s only 22. He’s fit, he’s confident, he’s practising a lot. I thought his goal against Kosovo was one of the best goals I’ve seen [from him]. He was calm, composed.

“We all like the screamers, the worldies, the top-corner ones, but, for me, that was a sign of a striker who is improving with his decision making in front of goal.”

Rashford still has his best years ahead of him, and even he feels that there is plenty more to come from him in the coming seasons.

Speaking in an interview with ESPN, Rashford said: “In reality, my peak is not going to be for another four or five years. As good as things are now, they can only get better.”

For a young player, Rashford has experienced a lot in his career to date and that will stand him in good stead for the future. From playing in World Cups, European Championships and a lot of big games for United, the forward is destined for success in the future.

He added: “I just use these experiences now in my favour to better me in the future, because I know when I’m 25, 26, 27, they’re the years when I’m going to be playing my best football.

“I’m just looking ahead to those times really and improving as much as I can until then.”

United take on Sheffield United at Bramall Lane later today and we all hope Rashford will continue his goalscoring form. The Blades are strong defensively and know a win will keep them higher up the table than anyone imagined at the beginning of the season. They will be without United loanee Dean Henderson.