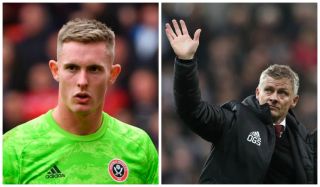 Ole Gunnar Solskjaer thinks Dean Henderson will have a long and successful career at Old Trafford when he returns from his loan deal.

Henderson is currently on loan at Sheffield United but has been linked with a move to Bundesliga champions Bayern Munich, as reported by The Mirror.

The 22-year-old has played 12 games and has impressed as newly promoted Sheffield United moved to eight in the Premier League standings, though Solskjaer’s men can overtake them with a win today at Bramall Lane.

Henderson is not eligible to feature against his parent club which is a major blow for the Blades.

Solskjaer is happy with the youngster’s development and he has a contract with United running until 2022.

“Sheffield United and Chris Wilder have had a big impact on him because he’s learning, he’s growing as a human being and as a player,” the Norwegian told the club’s official website. “He’ll come back one day and will have a good career at Man Utd.”

Solskjaer also managed Blades midfielder Oliver Norwood in the United reserves and he’ll be playing against his former club this evening.

United must win to make ground on the likes of Tottenham, Wolves and Arsenal. A winning run must start now if we’ve any chance of a top four finish.