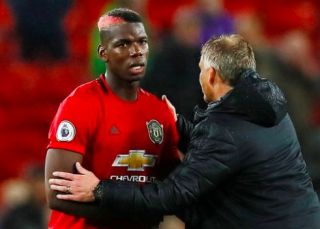 Paul Pogba is close to a return to first-team action after a long-term injury layoff. He has not played since United’s 1-1 draw against Arsenal so he has missed the last couple of months with an ankle injury.

Most fans in the pre-season said that because of a lack of depth in the midfield that losing Pogba for any length of time would be a disaster for the season and after hearing of his injury most fans would have been worried that the season would started to unravel.

Now United’s form hadn’t been great before Pogba got hurt but after a short period readjusting the team, the form has started to pick up again. While most think Pogba’s absence is a disaster for the team, it may well be a blessing in disguise for Ole Gunnar Solskjaer.

Pogba is undoubtedly a world class player on his day but he has not had many of those days in a United shirt; the second half in the Manchester Derby springs to mind but not many others. So, Ole has had to come up with a plan to get results out of the team and may have stumbled on a team and formation that works for him.

The greatest question about Pogba is how do you get the best out of him? Many have tried but failed, United signed Nemanja Matic and Fred to unlock Pogba allowing him the freedom he seems to crave. But alas this has not worked out the way we had all hoped when he arrived from Juventus in a world record fee at the time.

Rumours are rife that he is unhappy at United and communicated a desire to seek a new challenge last summer, so maybe the injury has given Solskjaer time to see how United would cope without him.

Instead of having someone who everyone would look to when things are going too well it forced players to take more responsibility and play as a team rather than focus on one individual not matter how talented.

Now I personally don’t think Pogba will stay in the summer and his potential sale would give Solskjaer funds to reinvest but also put his own stamp on the team with his own players and style.

Paul seems to be a man who wishes to challenge for the biggest honours at club level and after winning the World Cup with France in Russia in 2018 he may have the desire to compete at the highest level more regularly. Real Madrid have been linked heavily and also a rumour of a return to Juventus still lingers in the background so if United can sell for a profit or a large fee plus a player maybe this could benefit all parties.

The greatest problem United have is: Do they build the team around Pogba to unlock his undoubted potential or build a team that is better than the sum of its parts?

The example is that Barcelona have the greatest player of this or any era in Lionel Messi but there is a dependency on him and if he has an off night or is marked out of a game then they don’t win. If you build a team just to get the benefit out of one player and he is injured or as Paul has hinted at decides to leave, then what then? You have wasted time and money on a team which can’t function without him and needs to be rebuilt.

A parting of the ways seems inevitable in the summer or maybe in January as this spell without him proves that United can get by without him and if they recruit well then, his departure could usher in a new era at United.

United have two big chips should they decide to cash in to raise funds for players in Paul Pogba and Anthony Martial who would easily generate the most money should they come on to the market. Solskjaer would be keen to bring in his own players and may lose two talented but unreliable players to rejuvenate this team and take Manchester United forward.

This would not be the first time that United have signed a top-class player and it did not work; my mind goes back to Juan Sebastien Veron who was a world class player, but it did not really work for him in the team. Sometimes players just don’t work out at a team there is no reason or person to blame.

This spell on the sidelines was good for Pogba to get some rest and if we are being cynical , some distance from the poor form the club had in the early stages of the season. His value as a player on and off the pitch would not be associated with failures of his club on it, thus keeping his reputation intact for a lucrative future move abroad.

Pogba has kept his presence on social media active in his absence as his value is not entirely based on his ability to play football, but his profile. He will hope to be available for games against Tottenham and Manchester City, especially now Jose Mourinho is manager at Spurs. These are the highest profile fixtures so if he returns then his profile likely goes up ahead of the January transfer window.

A decision is definitely on the horizon as no matter how good any given player is or his value to the club everyone is replaceable. If he becomes an issue then for the benefit of the club he would need to go, no player is bigger than the club. In his spat versus Mourinho the club and a large majority of fans sided with him but if he does anything similar then he will not win against Solskjaer.

Going against a club legend would spell the end for Paul and would turn his exit into a nightmare considering the tactics his agent Mino Raiola uses to get his clients what they want.

The team is coming together slowly on the pitch with a sense of togetherness as this new United try to come back to what they once were. It’s a long road ahead but all great things come from small beginnings. Last season the club lost many games where it looked like certain players weren’t trying, but United might have not won games this season because they lacked effort, just the quality.

This current squad may not all be the most talented but they put in the effort as a team so this spell could be a glimpse of a future without Pogba.  At the moment the club have to ask themselves the question: Are they better trying to make this work with Pogba, or will the club be United without him?