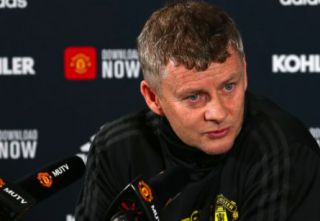 Ole Gunnar Solskjaer has confirmed Scott McTominay has been ruled out of Sunday’s game against Sheffield United with an ankle problem.

The midfielder was injured late on in United’s victory over Brighton before the international break.

“Scotty hurt his ankle and will be out for a couple of weeks,” Solskjaer said, as quoted by Manchester Evening News.

McTominay’s injury is a huge blow for Solskjaer. The youngster has become United’s best midfielder in Paul Pogba’s extended absence and is already leading by example with his aggression in defence and driving runs going forward.

He has been an ever-present this season and has covered more ground than any other United player.

His injury could also rule him out of games against Aston Villa, Manchester City and Tottenham.

“But now he’s learning the game and his improvement has been great to see. We’re gonna miss him at Sheffield United, set-plays, balls in the box. Scotty’s gonna be a miss,” Solskjaer added.

Solskjaer now has a decision to make on who to select in McTominay’s absence. Paul Pogba is still on the road to recovery from an ankle injury of his own, and Nemanja Matic may still not be match-fit despite returning to training this week.

Fred has been in much improved form of late alongside McTominay; the pair had begun to form a promising partnership. He could start alongside fellow Brazilian Andreas Pereira in central midfield, with Pereira dropping back from his preferred attacking midfield position.

Pereira has proven he can fill in adequately in central midfield, and if he starts alongside Fred it would give the opportunity for Solskjaer to start a more creative number 10 in Juan Mata on Sunday. However, Solskjaer may be concerned that the probable intensity of the game at Bramall Lane may mean Mata is not suited to start.

Alternatively, Solskjaer could hand an opportunity to academy graduate James Garner, who has earned a Premier League start. Garner could start alongside Fred in midfield which allows Pereira to retain his more advanced role.

Ideally for Solskjaer, Matic will be passed as match-fit and will be available to start in defensive midfield. However, if the Serbian is not yet ready, Pereira should play in central midfield allowing Juan Mata to come in at number 10.