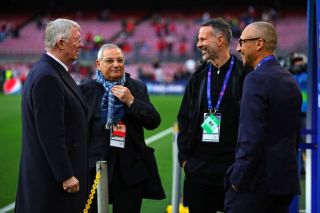 A 2-0 win over Hungary on Tuesday night saw Wales qualify for a second successive European Championship, but a first under Giggs who was appointed in January 2018.

Giggs has had to make some less popular decisions over the qualifiers — some which brought him in for heavy criticism — but that’s how managers learn, and thankfully for the ex-Man Utd midfielder Wales did enough to book their place at Euro 2020.

“Ryan was always going to be a top man,” Giggs’ old manager Fergie said, as per Sky Sports. “He is intelligent, he has great drive about him and is doing a great job with Wales — and giving young players a chance too. It is fantastic.”

Given the relationship they shared as player and manager for so many years, you’d think Giggs and Fergie would be in regular contact. The former United midfielder revealed earlier this month how the Scot sends him a good luck message before every match, as reported by the Mirror.

The same probably goes for Ole Gunnar Solskjaer, although maybe not as frequent as every game because United play most weeks and Fergie is usually in attendance.