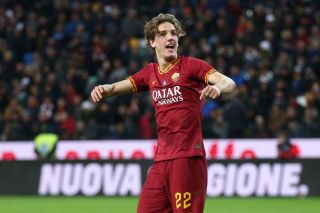 Manchester United will enquire about AS Roma starlet Nicolo Zaniolo when they enter negotiation with the Italian side over a permanent move for Chris Smalling, according to a report.

The England defender has been excellent since moving to the Italian capital on loan in the summer, with his form in a Roma shirt prompting interest from the Serie A outfit to secure him on a permanent deal.

A report in Il Messaggero (via Daily Mail) suggests United are planning on using the talks to edge their way into contention for Zaniolo’s signature.

It is claimed that United had scouts watching the 20-year-old attacking midfielder in Italy’s 9-1 win over Armenia in Palermo this week. He put in an impressive performance scoring twice, but the scouts were also said to be watching Brescia midfielder Sandro Tonali in the same game.

Zaniolo has scored five goals in 16 appearances and the Italian youngster’s progression was highlighted by his inclusion in the 2019 Golden Boy shortlist.

Apparently Roma are holding out for a fee of around £50m for Zaniolo but United will be hoping to come up with an agreement involving Smalling, who they will want to keep beyond this season.

Smalling’s current contract at United expires in the summer of 2022 and it seems like his future lies elsewhere.