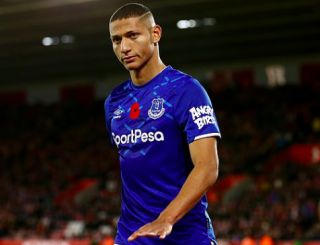 Everton forward Richarlison is among a list of targets being watched by Manchester United, according to reports.

Ole Gunnar Solskjaer is said to be prioritising the signing of an attacker in the January transfer window, and the Brazilian is among the players he is interested in.

The Reds have been left short in attacking areas after Romelu Lukaku was not replaced this summer, and a striker is needed to provide competition to Anthony Martial.

According to the Evening Standard, Richarlison, RB Leipzig’s Timo Werner, Bournemouth’s Callum Wilson and Erling Haaland are the forwards under consideration by the United boss.

Richarlison signed for Everton for £40m in 2017, as per The Sun, and has become a pivotal part of Marco Silva’s setup. He has three goals and two assists so far in the Premier League this season and netted thirteen times last season.

The 22-year-old is a versatile forward who can play anywhere across the frontline, which may be attractive for Solskjaer.

The United boss likes to play a fluid attacking system, and Richarlison is a pacy and direct runner who can cause problems for defenders out wide or through the middle.

However, a move for the Brazilian seems unlikely in January as Everton have no reason to sell one of their key assets.