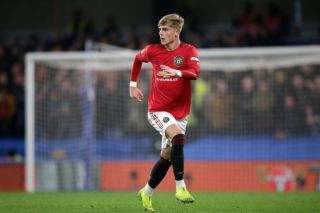 Ole Gunnar Solskjaer will soon have all of his full-back options available for selection.

Luke Shaw and Diogo Dalot returned to full training this week ahead of Sunday’s match against Sheffield United.

The Reds have been coping well in Shaw’s long-term absence, with Brandon Williams and Ashley Young filling in at left-back.

“He is quick and really good at attacking,” the former full-back said, as quoted by ManUtd.com.

“It is a real shame that he got injured. He has only played three games this season so it will be great to have him back, because he is strong and he is getting a bit of experience now.”

However, Irwin was also quick to praise Williams. The 19-year-old has taken his surprise first-team opportunities brilliantly with several impressive performances this season. He was not even selected for this summer’s pre-season tour of Australia and Asia, but has looked comfortable when thrust into action by Solskjaer.

“I have got to say, in the few games he has played, he has not looked out of place and he has probably been our best player in most of those appearances. He is great going forward, is not afraid to overlap at any opportunity – as a modern-day full-back should, and he is very comfortable on the ball as well. He is right footed and there is nothing wrong with a right-footed left-back, so he has been a breath of fresh air and a good challenge to the likes of Luke and Ashley,” Irwin added.

Irwin is also looking forward to the return of Diogo Dalot, who has been plagued by injuries in his early Old Trafford career.

“He is only young and has still got a lot to learn. It would be great to see him get a clean run, a few months without an injury, to give him that chance to challenge, not just Aaron Wan-Bissaka but also playing on the right wing. When we have played with three at the back, it suits him to play in that wing-back role. Attacking is his forte and putting in quality crosses is probably his biggest asset.”

United’s game against fifth placed Sheffield United at Bramall Lane on Sunday promises to be a tough test. The Reds can go fifth themselves with victory, but will wary of Chris Wilder’s side’s threats after taking points from Chelsea, Arsenal and Tottenham already this season.

We expect Aaron Wan-Bissaka and Ashley Young to start at fullback on Sunday, and Solskjaer could opt for a five at the back formation to counter-act Chris Wilder’s three at the back system.