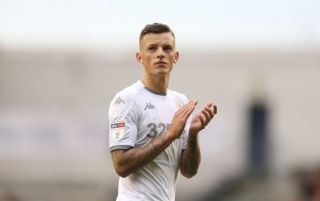 Manchester United have been warned Ben White is not for sale after the Brighton defender’s impressive displays on loan at Leeds United.

White has become a key member of Marcelo Bielsa’s team at Leeds this season, sparking reports that United and Liverpool are considering moves for the centre-back (via The Mirror), who can also play on the right side of defence.

But Brighton manager Graham Potter says White’s future is with the Seagulls.

“There’s all sorts of talk as we know, but the reality is he’s our player and has a future here,” Potter said, as per The Mirror, ahead of Brighton’s clash against Leicester City on Saturday.

“He’s on loan now at Leeds and having a positive experience, and we’re delighted with that.

“But we’re looking forward to having him back at the right time and we’ll go from there.

“He’s our player, he’s contracted with us.”

Potter makes it very clear that Brighton will fight to keep hold of the 22-year-old when he returns from Leeds at the end of the season.

Brighton will be wary of clubs like United and Liverpool showing an interest in White, though, even if they sound bullish about keeping him for the future.

Not many players can say no to opportunities like that because these clubs only need to come knocking once.

Leeds fans will be worried too, of course. If the defender is recalled to the Amex in January that could upset their promotion push from the Championship.

But Potter insists the plan is for White to see out his entire loan spell at Leeds before deciding whether he is ready for Brighton’s first team.

“He’s having a good time at Leeds, so we’ll assess at the end of the season to see what the best thing is going forward,” Potter added.

“Unless there is a real push for it we won’t call him back. He’s having a positive time at Leeds and we are well covered in that position. So, we’ll carry on with that process I think.”

White possesses great technical ability and is a tough-tackler. He’s also comfortable making surging runs from defence to assist in counter-attacks, which could be a reason he appeals to United. His passing is another bonus.