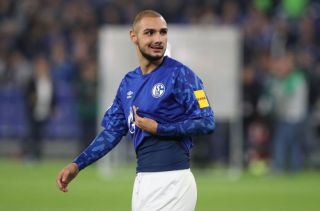 Schalke youngster Ahmed Kutucu has listed Manchester United among his dream clubs and outlined his desire to play in the Premier League.

Kutucu, 19, made his breakthrough at Schalke last season and has told Fanatik (via Goal.com) of his career aspirations. They don’t come as a big surprise, of course, with every young footballer dreaming of playing for the biggest clubs in the world.

“The Premier League is a beautiful and special league and one day I want to play there,” Kutucu said. “The fans are involved and close to the gameplay, and I feel the atmosphere there is very impressive. In those stages, you want to fight to the end, even with total exhaustion.”

The Red Devils have finished in the Premier League’s top four just twice in six campaigns since Sir Alex Ferguson retired in 2013. Current manager Ole Gunnar Solskjaer must get his recruitment of players right if United are to reach previous heights.

The Norwegian targeted young hungry players in the summer and that looks to be our new strategy moving forward.

Kutucu was then asked which clubs he would like to represent:

“Of course, clubs with history like Barcelona, Real Madrid, Juventus or Manchester United are every footballer’s dream.”

The striker has one goal and one assist in eight games this season, both of which came from the one game — a 5-1 hammering of Paderborn in September.

All of his appearances this season have come as a substitute, so if he’s not getting into the Schalke line-up he probably has less of a chance starting at United.

Kutucu recently made his senior debut for Turkey in a 2-0 UEFA Euro 2020 qualifying win over Andorra.

Anthony Martial and Marcus Rashford are the two main goalscorer currently at Old Trafford, but Solskjaer needs another to have four options available, with Mason Greenwood also breaking into the first team.