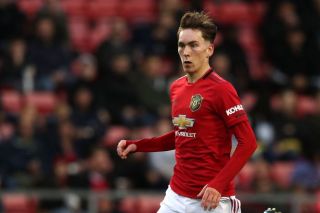 Improved form has led to improved optimism at Manchester United, with many beginning to believe that the young core currently representing the club could be the foundation for a stable and competitive outfit for years to come.

Ole Gunnar Solskjaer knows that he has plenty of work to do, though, as his side sit 9 points behind Pep Guardiola’s 4th-placed Manchester City side.

United also remain a point and two places behind Chris Wilder’s Sheffield United, a side whose compact nature and ability to score goals at crucial times has seen them comfortably through to the top half of the table, despite being promoted to the Premier League only a few months ago.

Solskjaer will take comfort in the fact that his star youth goalkeeper, Dean Henderson, currently on loan at Sheffield, is not in contention to start the match, which could slightly weaken what is currently England’s second-best defence.

Expect a full-strength lineup and a motivated United side resembling the following this Sunday:

Having not seen even a minute of action for Spain during the international break, David de Gea will likely relish the opportunity to return to the Premier League, where he is almost a certainty to start every match for Manchester United.

Despite his brilliant qualities, Wan-Bissaka was not included in England’s national team setup for this week’s fixtures, affording the 21-year-old some rest after he started United’s last 7 matches. Expect him back in the fold for United, though, as United aim to stop a side that has found the back of the net in their last four matches.

While Marcos Rojo has shone during United’s recent purple patch, Lindelof remains the first choice and best tactical fit to start at the back for United. The Swedish international is an expert at transitioning the side into midfield with his ball-playing and carrying ability.

The transformative effect that Maguire tends to have on unsettled defences has seen him not only become a staple for United, but also in England’s international setup. Expect Maguire to be tasked with handling Lys Mousset, the typical catalyst of Sheffield’s attacking success.

Ashley Young’s suspension against Brighton allowed Williams to step up to the Premier League plate, and, performing superbly, he staked his claim to be United’s starter at left-back. Whether he can maintain his current form and usurp the injured Luke Shaw is yet to be determined, but Solskjaer is unlikely to complain about an added option in what has been a problem position for United since Sir Alex Ferguson’s retirement.

Sitting in place of the injured Nemanja Matic on the bench over recent weeks, it seems most likely that Garner will be the player to step up in the absences of Scott McTominay and Paul Pogba. Garner has grown into the senior setup over recent weeks, and, while inexperienced, will relish the opportunity to prove that he can be a part of United’s squad in the long term.

Plenty of skepticism has surrounded Fred since his arrival at United, and while he has stepped up in recent weeks, he will now have to take command of the midfield in McTominay’s absence. The 26-year-old has shown his ability in high-profile Champions League matches for both Shakhtar Donetsk and Solskjaer’s United, but he needs to be more consistently commanding in midfield if he is to become a regular.

Combining cunning nature and rapid acceleration to devastating effect, new-signing James has become the x-factor of United’s attack, recording 3 goals and 2 assists in 12 Premier League appearances this season, as per WhoScored. The Welsh forward came very close to scoring a stunning strike during the international break, and he will surely be looking to make up for that post-shattering effort by finding the back of the net this weekend.

While Juan Mata has impressed in attacking midfield in recent weeks as Pereira’s form has dwindled, the latter remains likely to start behind the striker after scoring a (slightly lucky) goal against Brighton. The pressing system that Pereira seems to lead from the heart of the side is crucial to Solskjaer’s tactics even if he often lacks the quality to assert his influence on proceedings.

Rashford has shown markedly improved form over recent weeks, scoring 5 in his last 5 matches. Playing off Anthony Martial gives the United academy graduate the freedom to express himself on the pitch and feed off a more conventional striker to create opportunities for himself.

Martial’s two assists against Brighton made up for his inability to score, and once again proved the assertion that he is an integral piece of the United attack. The French striker should be a near-certainty to start this weekend’s crucial encounter.